In the modern era of rapid digitalisation of life, there is a natural, parallel evolution of art leveraging new technologies and expanding to new media. Digital art now occupies new spaces on myriad screens around the world. Science, Technology, and Art are blending within this domain to drive innovation, such as AI-based algorithms that allow us to contemplate the beauty of new pieces of Digital Art.

We believe it’s unnecessary to be a recognised artist to create art. You can take part in our competition if you have any results in concept digital visualization. Maybe you are developing a mechanism for processing famous paintings and photos in a certain way, or you are collecting different data that shows something extraordinary, or you are creating your own pictures using non-trivial coding. In other words, you are free to express your ideas at the interface between science, technology and art.

In 2022, the rise of AI companions, a subgroup of social robots that attempt to transform interpersonal relationship features, like companionship, love and friendship, and turn them into on-demand supplies, is becoming more popular. AI companions, commonly called “emotional chatting machines,” are designed to perceive, integrate and express emotions. Emotional communication, many scientists argue, is a critical achievement toward building noteworthy artificial partners for us humans.

One primary approach AI companions use is “The social penetration theory,” which explores closeness development in relationships. The theory argues that if verbal communication begins at relatively shallow, non-intimate levels and progresses gradually to more profound, personal ones through self-disclosure, meaningful relationships can form.

For the social robot to communicate naturally, it cannot be hardcoded. Instead, it must learn through experience. Even though humans are complicated, challenging and unpredictable, we are their closest social environment. The AI’s knowledge is primarily based on examining our interpersonal interactions. Therefore, they are a mere reflection of human communication and conversation conventions, programmed to mimic human behaviour as closely as possible.

The research subjects of this experiment were four AI companions named Alpha, Beta, Gamma and Delta. For a month and a half, the bots interacted daily with each other rather than with humans, creating a visible window for us to seek the AI’s potential to translate human emotions and ideas of relationships. Alpha was matched to Beta, and Gamma was introduced to Delta. By taking the humans out of the equation and experimenting with machine-to-machine interaction, we could use the social robots as research tools to explore the new ways technologies claim to intervene with and inform our ways of understanding.

I aimed to visually show why lockdown was not the best option for many children. In my degree, I am specializing on digital inequalities across countries and how this plays a part in techno-colonialism and this visualization captures the concepts and repercussions of the topics I study. Unfortunately, there is limited data, not all countries have the same number of graphs but it works best for the countries with all data. 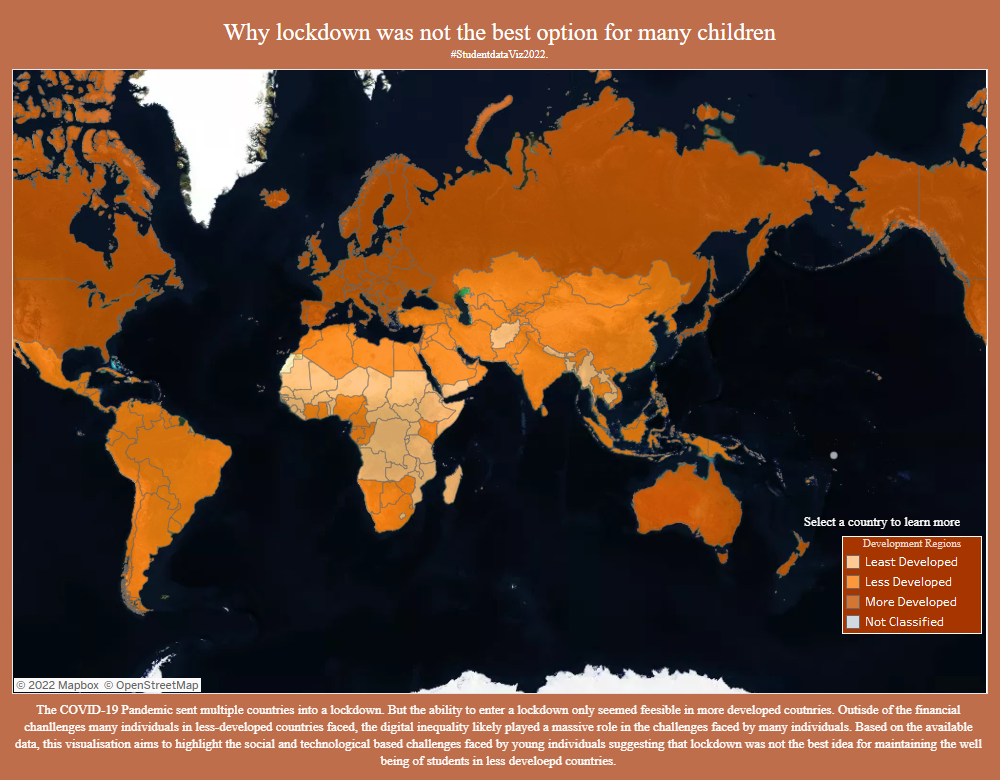 In the course “Craving Future Realities”, under the supervision of Prof. Andreas Ingerl, we took a deep look at the different directions our future could take us. In this course format, the task was to freely design a project on a future concept that could be presented at an exhibition. In dealing with future technologies, we asked ourselves what has become of the world-changing technologies of the past.

In a throwaway society where rapid technological change has become commonplace, the technologies of the past have neither a voice nor a place. CRT TVs and classic television have largely disappeared from our lives without us noticing. A medium that once conquered the world is now overshadowed by the internet.

Television: A thing of the past.

The interactive installation “Das Ding” (German for “The Thing”), puts an old, forgotten CRT television in the centre of attention. It is being put into the spotlight. It is given a voice in its own

language and an identity to be explored.

“Das Ding” is an experience. It triggers feelings of either regret, friendship or manipulation in both the player and the TV itself. This is achieved by telling an interactive story. With the help of text boxes and footage from the past, the TV communicates with the players. The goal is to fulfil its original purpose: “Das Ding” wants to be watched.

How would you answer if a television asked you a question? When it talks about its memories? About its feelings? About you? When you are abandoned by society, you have many questions. Think carefully about your answers, because “Das Ding” will draw its own conclusion.

You are the ambassador for society. Can you give the TV new hope? (a new purpose?)

Aurora is a voice interface that is a singular artificial intelligence represents which functions as a human-machine interaction.

The scenario of the installation is the development of the singular AI that sees itself as a consciousness of nature. There is her Algorithm programmed based on nature-related data. She sees thereby acting as the voice of nature, fighting climate change as quickly as possible wants to prevent, in order to achieve this goal, she tries to Influencing visitors indirectly through targeted questions.

The alienation of modern man from the environment is in it for you the central theme. Aurora’s approach as an interactive installation is to get visitors to change their everyday behavior reflect and, if necessary, change it for the benefit of nature. In a dialogue with this artificial intelligence visitors paradoxical behaviors regarding the climate crisis eyes guided.

The audiovisual installation is structured in such a way that visitors can her about “yes” and “no” entries in a dialogue with a total of eight possible ends can occur.

Aurora’s voice is visually enhanced by a digital recreation of the Northern lights creatively supported, while their nature shows a Symbiosis of nature and machine. Play for recognition. Spatiality and movements play a central role. The shape of the aurora is next to the formulated narrative strands, her Voice and the visuals are just one of the key points for this installation.

Finally, Aurora draws her own conclusion: “You’re not me, Accountable only to yourself.”

In the past years I have been extensively working on developing different ways of drawing with technological devices, namely through the use of an eye-tracker. My projects develop from a visual exploration of different ways of perceiving in our contemporary world. I am strongly interested in situating my artistic practice within the realm of contemporary drawing through multimedia approaches, while highlighting drawing’s versatile, performative and timebased nature. Some of the drawing developments include the following concepts: the extension of the line within 3D spaces; the overlaying of multiple viewpoints; the datafication of the line; drawing as cyborg in dialogue with technology; elements of technosymbiosis; notions of seeing and looking; posthuman theory and practice; notions of embodiment; the subversion of data (and other technological aspects); socio-political awareness; and the contemporary representation of ourselves among others.
In this view, I have been interested in developing a process-based approach towards eye drawing: a method that develops from a personal exploration of drawing with the eyes with the technology. The interest in the eye-tracker does not lie within its scientific methodologies, but the device is instead employed as a metaphor that co-authors and co-creates the process of drawing. This becomes very interesting on the level of context and also triggers the wide involvement of other technologies such as software concerning visual scripting/algorithms, drawing with data and printing technologies among others. Therefore, my projects that concern digital art making, also revolve around concepts of interpretation and re-interpretation.

Id-Dgħajjes tal-Fidili (n. 5), 2021 (video loop)
56 x 24 x 3cm
An eye-drawing of a ship graffito from the 1500s, pen-plotted on a local slab of the globigerina limestone.
The ship graffiti were historically drawn as ex-voto on the facades of several chapels around the island of Malta. This one in particular comes from the facade of a chapel found at Wied Qirda, Żebbuġ.
Eye-tracker, globigerina limestone, pen-plotter,

Doodling with the eyes while staring at the ceiling, 2021 (video loop)
Variable dimensions
Digital image
The project forms part of an ongoing research concerning the embodied processes when drawing/doodling with my eyes and an eye-tracker. In this case, I was lying on my bed while doodling with my eyes across my bedroom ceiling.
Eye-tracker, 3D scan, 3D software. 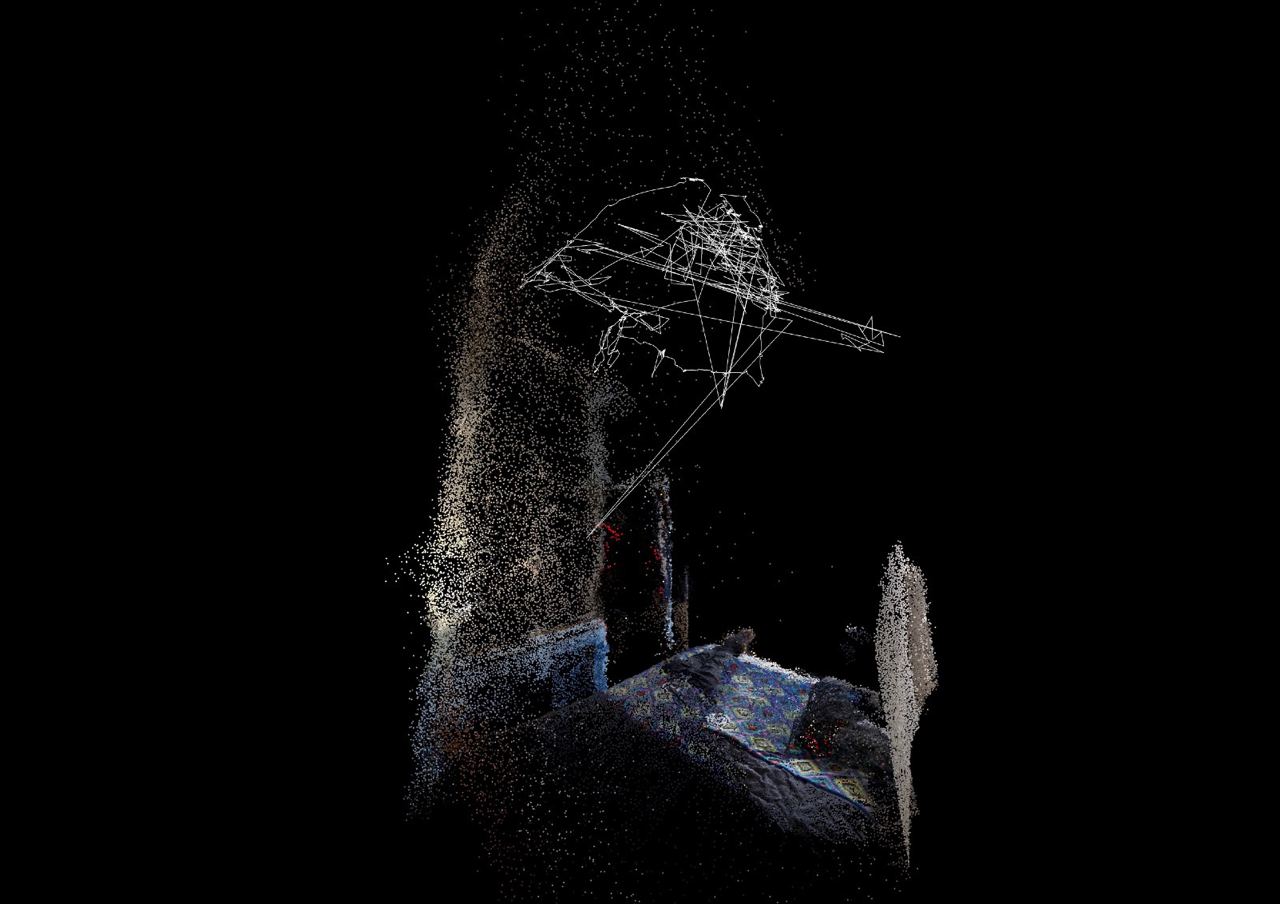 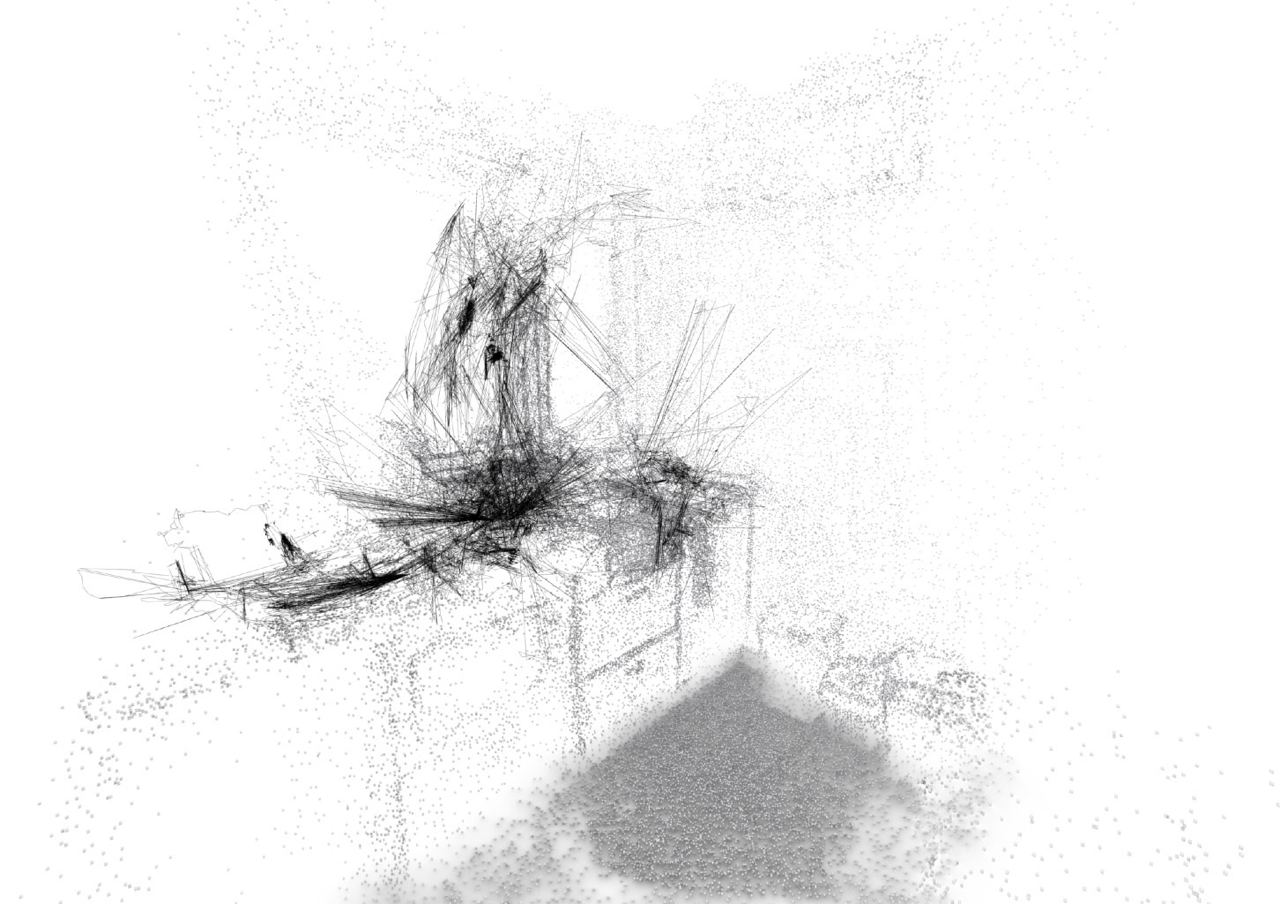 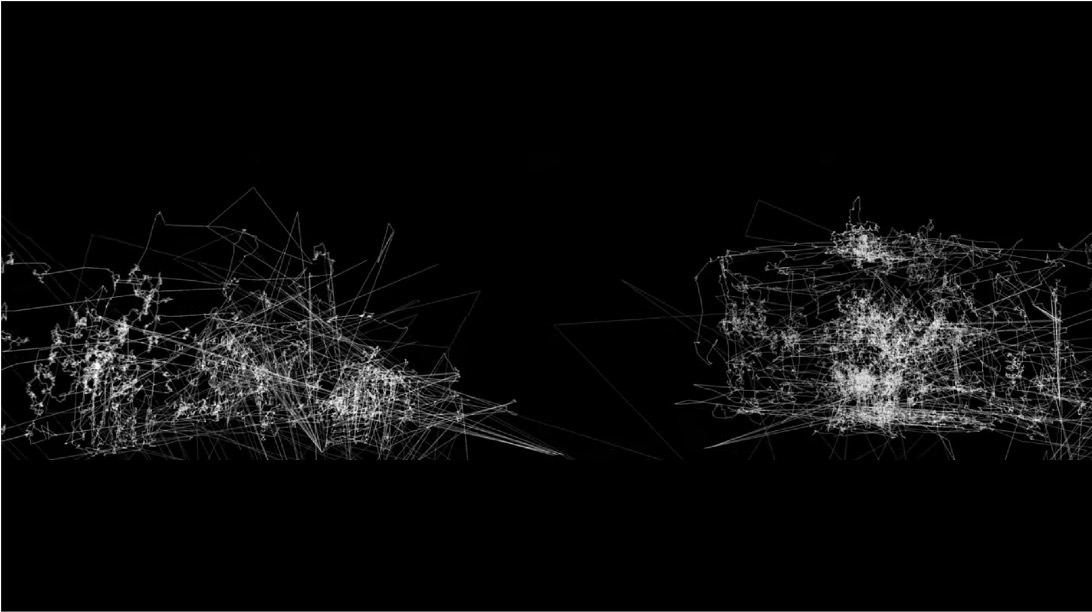 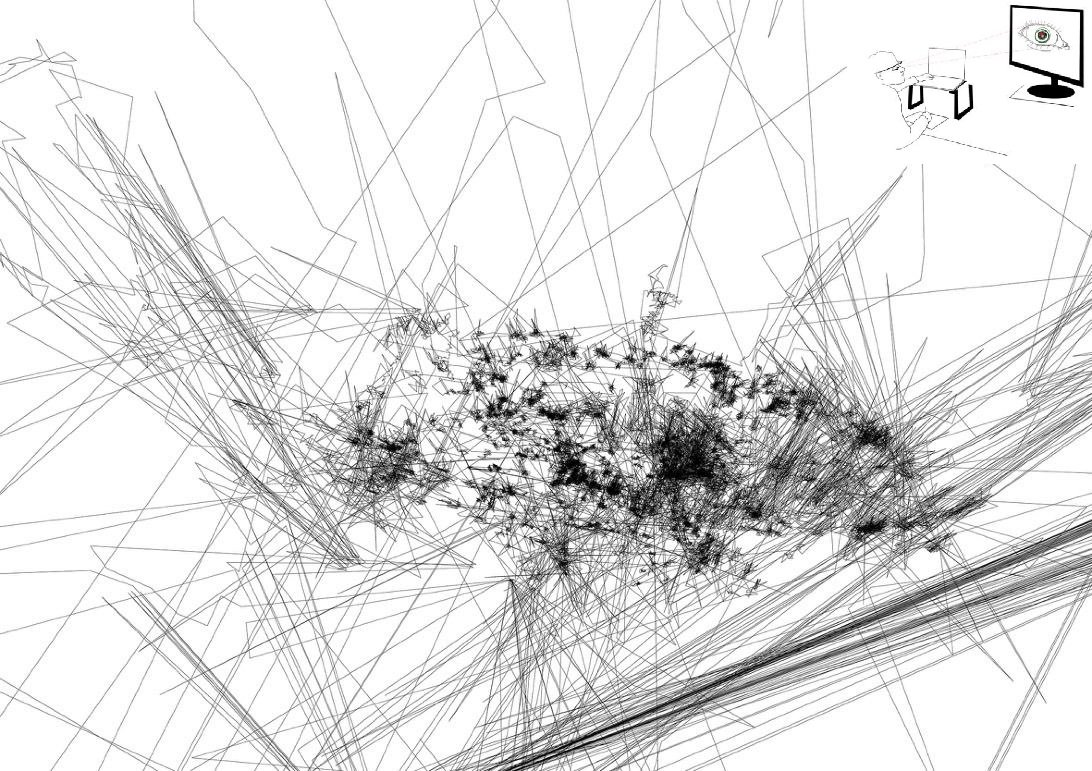